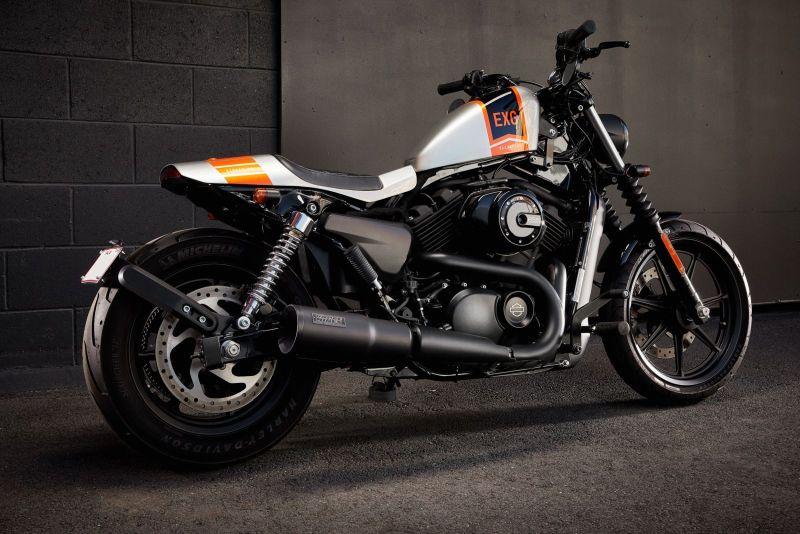 The ‘Harley Family’ has some incredibly iconic looking motorcycles, many of which attract owners to the marque just by looks. But we felt like the tank and tail didn’t represent the HD heritage we had in mind for a fun 500. Enter Gasoline Alley Harley Davidson (GAHD).

Part of the plan was building a custom bike that was easily repeatable, should orders start flying off the floor down at GAHD where this bike is now parked. So hardtail conversions and custom made tanks were out of the question. Plus, even though the Street 500 is a ripper ride you’d be happy to hoon around with on an open licence, we didn’t want to ‘over capitalise’ on a LAMS bike. Mainly to ensure those entering the custom scene can get a rad looking HD to ride without breaking the bank.

The centre point for this Street 500 is now the Sportster Seventy-Two tank, mounted with a bolt on Ellaspede Seventy-Two tank kit. Removing the ‘flat and wide’ stock tank in favour of this one certainly transformed the look of the bike, and once we knew it was possible the design direction was decided on.

The stock seat and rear section on the Street 500’s is big for the size of the bike, so trimming that visual weight out was a key concern. We liked the look of the FXDR rear with it’s short finish seat cowl, but knew it would be far too big for this frame and didn’t quite match the lines of the Seventy- Two tank already in place. Using it as inspiration, a custom made aluminium cowl was created that fit the frame size and flowed on from the back of the tank.

The long seat support on the factory frame was trimmed back and braced before an aftermarket tail light subtly slide in underneath the new seat cowl. New rear indicators now tuck in on Ellaspede Street 500 Rear Indicator Brackets just behind the factory rear shock mounts.

A short rear required a resolution for the number plate mount, which presented an opportunity to design and develop the Ellaspede Street 500 Number Plate mount kit. It fits to the stock swing arm, positioning the plate in a legal position without compromising the shorter custom seat design.

Once the rear was looking trimmed and tidy, attention turned to the factory muffler which now looked even bigger than before. GAHD sourced a sweet Vance and Hines slip on that not only looks the part but gives the 500 mill a more meaningful Harley sound.

With the bike now sounding more like a Harley we wanted to get it riding more like Harley. The factory mid control foot pegs are in a useable position, but we just had to fit forwards for a more genuine HD experience. The available options seemed expensive and didn’t match the look of the bike, so we developed our own and the fully adjustable Ellaspede Street 500 Forward Controls are now fitted to this bike.

The stock bars are comfortable and fit the look of this application, but the factory mirrors were replaced with under slung adjustable items to keep the visual line looking low. Removing the headlight cowl and associated brackets also revealed a tidy headlight unit that sits snug and low in the stock position, well done HD! New indicators on an Ellaspede Street 500 Front Indicator Bracket complete the front end tidy up and trim down.

Rounding out the changes was some electrical work to wire in the new components, while the radiator fill neck was modified to fit with the Seventy-Two tank changeover.

When it came to paint the traditional Harley orange was hard to go past, but we wanted to spice it up with some sparkle. Sometimes black doesn’t highlight shapes the way you want, so a smooth silver was laid down to compliment the enhanced factory orange.

The final result? We’ve combined some current Harley aesthetics in a mid size ‘sportster style’ package. The Harley Davidson Street 500 already does a lot of things right, but now that it looks and rides a little more like the bigger bikes we think it’ll continue to kick goals in the mid sized market.