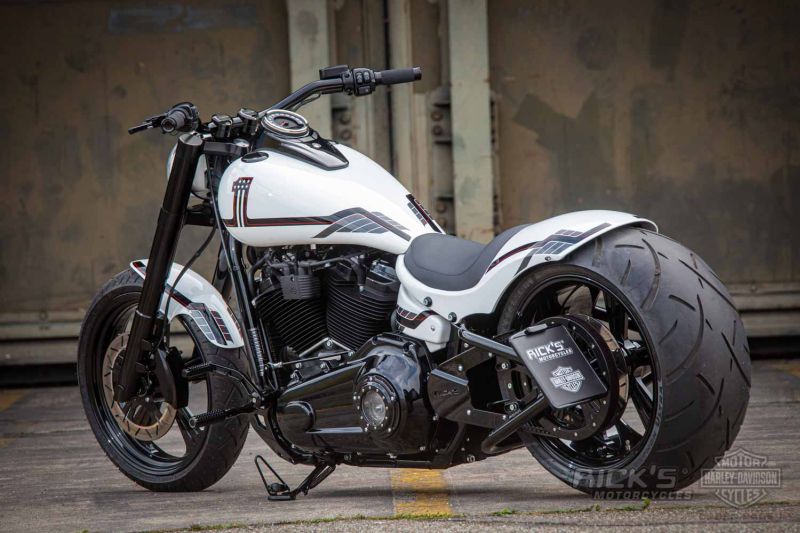 Harley-Davidson Slim ‘The one and only’ by Rick’s Motorcycles

Harley-Davidson Slim ‘The one and only’ by Rick’s Motorcycles

The Harley-Davidson „Slim“ is, as the name suggests, more (or less…) a „Softail“ model with slim lines. Reason enough for the Rick’s Motorcycles team to show that it also cuts a good figure with a wide tailed and a high-class front. Of course, the customizing took place at Rick’s in Baden-Baden and almost all parts mounted came straight from Rick’s Motorcycles production lines. Here are some details on the most important modifications that make this bike a unique work of metal art!

Few people realize that there are two frame versions of the Milwaukee-Eight Softail model lines: The „Slim“, „Heritage“ and „De Luxe“ models are based on a „narrow“ frame width, all others on a slightly wider framework, allowing for bigger rear tires to be mounted even on stock bikes. Rick’s „Fat Ass Kit“ has always made it possible to implant almost any tyre width into any given Softail model. Utilizing the special developed Rick’s intermediate shaft with a second belt, the final drive belt is moved outwards and allows the wider tyre sizes. The benefits are visible: The wheel can be aligned centered in the frame and there is no disturbing offset. Optimal cornering is granted at all riding situations.

On to the front end, again there is nothing as we know it from the stock version of the „Slim“. The entire fork, including triple-trees, is available from Rick’s for the Milwaukee-Eight Softail models. These forks looks like a unique „single piece“, all machined transitions are smooth and clean, all screws have been hidden or covered with matching covers. Super clean from the outside, technological advanced inside: Progressive fork springs, seals and damper elements are of OEM quality. Rick’s „Good Guys“ fork is TÜV-approved including homologation for Switzerland. The headlight bracket lamp is adapted from the long-discontinued original V-Rod and – in combination with the Rick’s fork – grant a style that is as timeless as it is clean. With the brake caliper matched to the design by Rick’s, a total of six pistons bite into a brake disc also manufactured by Rick’s.

Even though Rick’s today manufactures well over 1000 different customparts, the well-established Rick’s Design Wheels are still among the best-known Rick’s items. Of course, Rick’s wheels were also chosen for this project: The 5-spoke design of the one-piece forged wheels is christened „Gimmi 5“ and was powder coated in black. For the rear wheel, the choice was 10.5 x 18 inches and 4.0 x 18 inches is the front width. The rear brake disc was moved to the drive side with Rick’s Drive Side Brake System, which makes the rear wheel design completely visible on the right side.

However, the style of a true custombike is essentially determined by the bodyparts. Again, the Rick’s team has „gone the extra mile“ to achieve tis outstanding result: The rear mudguard is „stock handcrafted“ Rick’s 300 Kit for Milwaukee-Eight models. An additional frame cover has been incorporated to hide the frame tubes under the seat, which allows the entire rear end look like a single piece – thus much cleaner and refined. The tank still is most reminiscent of the former „Slim“, base, but the fuel reservoir has not been left untouched either: Rick’s sheet metal workshop has stretched the stock tank considerably – not to increase the capacity, but rather to optimize the overall line. The customized tank now stretches over the two cylinders in a gentle curve, almost completing the look. So what’s left? The rear mudguard is new, the tank has been re-designed: So the front fender cannot be left out. There’s no question that the full metal fender in front also comes from Rick’s great parts range.

Finally, the list of accessories used is remaining – and again, almost all of them came from the Rick’s cataloge: Airfilter, grips, handlebar; risers, the adjustable brake and clutch levers and the footrest system including AK 4.7 footrests all are marked with the distinctive Rick’s logo to refer to one of Germany’s top custom parts manufacturer. Only turn signals are manufactured by Kellermann and are called „Atto“.