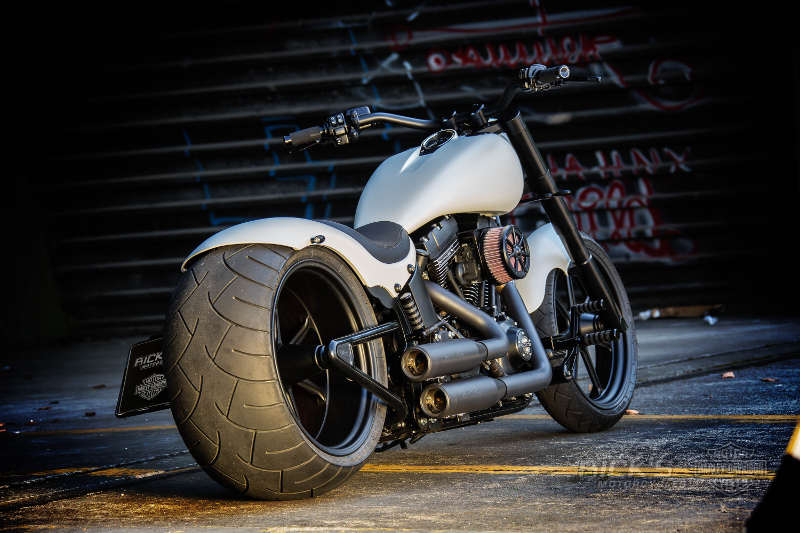 It’s no secret any longer: if you are looking for that special “kick” in the Harley-Davidson model program, people find it mostly in models which have been equipped with parts from the Screamin’ Eagle tuning program. The components stem from the long racing experience that authorized Harley-Davidson dealers and their customers have gained especially on the drag strips, because in the USA what counts is above all the pull from below and acceleration. Speed limits on public roads are in some cases limited to 70 or 80 mph, whereas on German motorways the fun only starts then! After many years of testing in special limited CVO models, the 110 ci Twin Cam was during the last few years used in several models – also as an option for some Touring and Softail model series. The really excellent power performance makes this Twin Cam one of the most popular in the Harley-Davidson program!

When the first Softail Slim was available as a demo ride during Rick’s Day 2015 the test riders were forming an orderly queue! In fact, the Slim had to be taken out of the hourly demo ride schedule so that riders could enjoy the bike in 10-minute intervals the whole day on a shortened track. The result was beaming faces and several customer orders for the power package!

But it is certainly in the nature of things that many of Rick’s customers have their bikes customized immediately by the “metal cutters”. In this case the 2016 Slim had a nearly complete overhaul both in terms of chassis technology and looks. The stock bike has a more Bobber and Cruiser look – footboards, Fat Boy fork, short-cut fender and fat tires front and rear – whereas Rick’s bike makes no compromises…it is a radical custom!

This starts with Rick’s “Good Guys” fork, a set of “Seven Sins” designer wheels, and does not end with the built in Rick’s 300 “Fat Ass” kit. Frame and engine remain almost stock, but Rick’s metal workshop applied the finishing touches: stretch, front fender and rear part – all from the finest, and all machined from full metal! The conversion to the Baroque 300 tire width at the rear is done with Rick’s tried and tested “Trick’n’Roll” kit, which via an intermediate shaft in the swingarm center transfers power to the rear wheel. A technically elaborate solution, but meanwhile established standard at Rick’s.

The “Good Guys” front wheel fork, in this case with Rick’s own six-piston brake caliper, slims down the front enormously, due also to the V-Rod headlight. Due to the larger wheel diameter the fork is mounted in a 4 inch shortened version. At the rear a Legend air suspension system ensures riding comfort and an unrivalled low sitting position, and the “Drive Side” brake system keeps the view onto the fat rear tire free.

The engine was given a Rick’s “Good Guys” air filter, matching the wheels in the same design, a KessTech system disposes of the exhaust fumes with more or less sound. For this the power package was tested on the dyno with the H-D Motortuner and now runs perfectly!

The list of Rick’s accessories, from the foot controls to the adjustable hand grips, underlines that a Rick’s custom bike of the finest kind was built here. More is almost not possible, but honestly: does one need more?