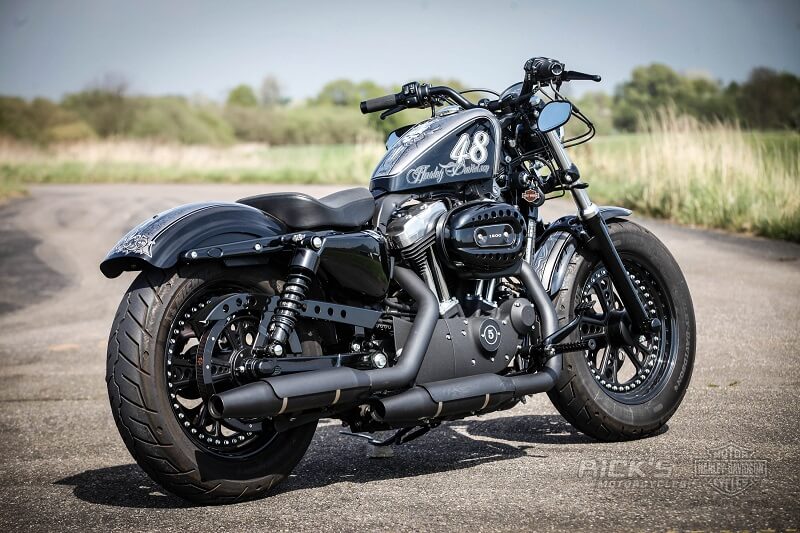 Platinum literally means small silver. The Incas gave the highly valued metal its name, but were at a loss of what to do with it because of its high melting temperature and the difficult way of working with it. The same applies to the Sportster build series. Ignored for a long time, Harley’s little bike stood around in the showrooms waiting for some girl to offer the XL a new home. But this is a while ago, because with the introduction of the Sportster 48, these bikes were highly sought after. Rick’s Motorcycles converted a 48 into a very special bike.

Rick’s Motorcycles is a high-class address for radical stock customs modified for style and performance. The majority of Rick’s bike projects keep the stock frame and engine so that they can be serviced and looked after at the local Harley dealer. With only a few modifications Rick’s team transformed this Sportster Forty Eight into a compact, very clean and really cool ride.

Rick’s “Rodder“ design rims in size 3.5 x 16 inch received front and rear “Rodder” front disc and drive pulley. At the rear the stock disc was kept, as well as all brake pistons. Front and rear fenders were bobbed, also suitably shortened, and play an important role in the whole black/silver design, which is further emphasized by Harley-Davidson’s Dark Custom motor covers. The Old School flair is enhanced by cut-outs in the stock air filter. Furthermore, the Harley-Davidson rubber grips were used, but the stock indicators were exchanged for Kellermann design parts.

Rick’s Motorcycles offers very clean and compact mounting holders. The two rear indicators serve as rear and stop light in the way already introduced by Harley-Davidson a few years ago. Rick’s side license plate holders have been used for years, and because of the large German plates, the stock brake disc was not exchanged with a “Rodder” design disc. The Sportster motor remained untouched because the aim of this conversion was to keep the costs low, but to achieve a cool look nevertheless. Only a pair of staggered Vance & Hines “Short Shots” were added. The short pipes offer a good view onto the rear wheel and the “Rodder” drive pulley. It is obvious that the addition of an authorized Harley-Davidson dealership to Rick’s Motorcycles increased the motivation of the team at Baden-Baden for creating superb custom bikes…like pouring gasoline into the fire!